Almost one year after the initial creation and standing in our makerspace display at MakerAustria  i decided to continue the project and fix the issues of the first version. Upgrade to decent pumps and make 4 instead of to in order to be able to serve more cocktails, add a smoking cigar, light up benders eyes, enable voice output… and get it done till Maker Faire Vienna beginning of May 2018.

First i removed the styrofoam eyeballs and changed it to clear decoration halfglobes which i sprayed white from the inside. After adding a neopixel strip to benders head i glued the eyeballs on top. For controlling the lightstrip i connected a Wemos D1 mini board which is based on the cheap but powerful esp8266 chip by Espressif which has onboard wifi for connecting it to a network and gives remote controlling possibilities, as i wanted to control bender via app or website.

Then i built a holder for 2 Tetrapacks into his head in order to add the missing liquids (the other 2 Bottles are hidden in benders legs.

Thanks to a sponsoring of Hutchison Drei Austria GmbH we got a Hui Tube Wifi router in our Lab and my plan to get bender connected was in reach to be implemented.

Next part was the actual serving mechanism where i bought some cheap peristaltic pumps with 400ml per minute serving ability (at least on the datasheet it was like this). A NodeMcu board, based on the same esp8266 chip as the eyes was used to drive a relay board which can switch the individual pumps 12v power.

How can we assure that the correct amount of liquid is served? Measuring time and then flashing this onto the esp didn’t sound good for me and so i decided to use a 10kg loadcell together with a hx711 amplifier and another Wemos D1 mini to measure the weight of the liquid.

After having all the individual hardware parts done there was one big problem to solve, how does this all play together.

First thought: Connect each esp to our Labs MQTT broker and write the relevant firmware for each part.
A week later after struggling with timings, and correct function, uploading firmware over usb a thousand times i found the perfect solution for my problem.

A cloud instance of MQTT in combination with node-red, in this specific case i used the IBM Internet of Things Platform and a node-red cloud foundry app. A few days later, the device firmware was ready to go, and in the evening i assembled a node-red sketch with a dashboard for accessing the serving part via smartphone.

Now it was time for a name change from TheBarBender to TheCloudBarBender and i was looking forward to present it at the Maker Faire Vienna. At this time it was only tested by switching the pumps via the sketch and adding weight to the scale by hand because I didn’t want to fill bottles and Tetrapacks into bender and get drunk while testing I was pretty confident that everything just works perfectly.

Friday the 4th of May 2018 we carried many many projects to the exhibition area of the Maker Faire Vienna and on Saturday morning we decided to do our first reallife test. We were shocked that suddenly only 2 pumps out of 4 were switching and my fellow friend and CoMaker Christian (who was infected with the node-red virus pretty hard ;)) reprogrammed the whole nodered stuff, but we still didn’t get those damn 2 pumps to switch. Software looked good, MQTT messages as well, even the microcontrollers received everything and seemed to do the right thing.

Conclusion, the relay board is broken and we don’t have a spare one with us. We gave up and reduced to 2 pumps and therefore only one Cocktail.

The exhibition started and we were still thinking and thinking what could be wrong. I disassembled the whole serving mechanism and then i found the issue: The relay board is a 5v board and the Esp is just providing 3,3v. All switching lines had a level shifter to 5v … BUT … the powersource to the board itself was only 3,3v -SHAME ON ME!
A quick soldering action and this problem was solved, hooooray – bender is serving drinks perfectly and people did a lot of photos and were impressed. I even made it to a local newspaper. 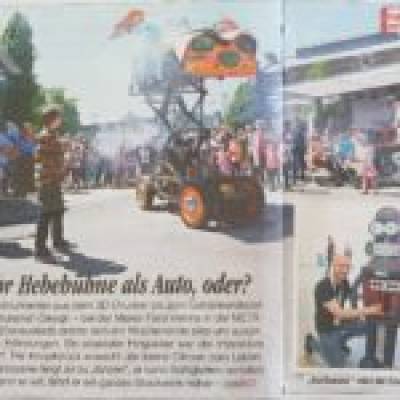